Blackjack Gamblers Get Lucky at Borgata Casino in Atlantic City 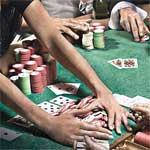 For some players, blackjack card games are just another game of chance.

For others, blackjack is a game of card counting and advanced strategy. It’s a game with a notoriously low house edge of less than 1%. For players and casino operators alike, that little one percent, can be either a gigantic opportunity or a gross detriment.

Borgata Hotel, Casino, and Spa took an immense hit at their casino tables in the last financial quarter. $9 million in lost revenue was enough to provoke executives at Boyd Gaming Corp. — Borgata’s parent company – into complaining. The third quarter’s poor revenue is largely being blamed on an abnormally small table game hold.

Boyd’s president and chief executive officer Keith Smith assures “everything is fine. . . . We’ve done all the diligence and looked at it. I think it is a function of luck. It happens in our business, where you can run for a number of months with a low hold.”

Boyd’s chief financial officer Josh Hirsberg observed “The hold is not limited to one area of the casino. It’s kind of throughout the table gaming area. . . . It’s not throughout the market, either, so there’s something unique at Borgata at this point.

Borgata’s vice president of marketing Dave Coskey insists that the casino conducted an internal review of the blackjack and other gaming tables and found no evidence of foul play. For security purposes, exact details of this review are not available.

A true marketing genius, Coskey spun this story faster than a roulette wheel, “We’ve always said that Borgata can be your lucky place. Our customers proved that during this month.”

Beyond the poor revenues, Borgata’s having an inauspicious year. In September, the Atlantic City casino was busted allowing for underage blackjack players.