The State of Maryland Reconsiders Blackjack to Solve Economic Rut 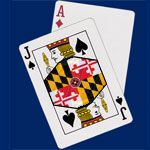 Maryland has been suffering from the economic crisis and is now looking towards blackjack and other forms of wagering to reduce its economic burdens.

To date, under the current guidance of State Governor Martin O’ Malley, Maryland has held out against blackjack. However, Maryland has a gigantic deficit which is expected to grow to $9.5 over the next five years. Moreover, the state’s horse racing industry is on the verge of collapse, which would directly eliminate 6,000 jobs. Numerous horse farms would also suffer lost income, resulting in additional layoffs and even foreclosures.

While one debate the morality and necessity of spending taxpayer money on educating and caring for the health of the less fortunate, the undeniable fact is that Maryland outspent its resources for many years. Meanwhile, politicians mismanaged the horse racing, as they evidently failed to comprehend its complexity; more importantly, they ignored dangers and prospects presented to the horse racing industry by the rise of blackjack casino gambling.

Senate President Mike Miller wishes to make major reforms to the state’s insanely restrictive gambling legislation. Should his scheme come to pass, the state could expect hundreds of millions of dollars in new revenue. Likewise, the horse racing tracks would resume economic viability.

In fact, owners of Laurel Park now threaten to close the race track which operates year round. This came after Maryland opened the state’s first casino three days early. Malley, who infamously stated ““I don’t believe that people want our state to be a casino state.” is seen as reluctant, despite the clear need for assertive leadership. Never-the-less, the risk of losing Laurel Park which will devastate the local horse racing business is an obvious invitation for gubernatorial intervention.

Citizens and newspapers of Maryland are proving Malley’s statement to be inaccurate as they now calling on the governor to work with Mike Miller to enable Laurel Park to operate casino-style games such as blackjack card games and highly lucrative slot games. The legislature and Maryland State Lottery Agency would then be in charge of authorizing additional gaming tables and slots machines as they are needed.