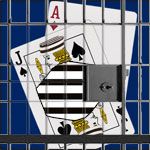 Prisoners at Nevada State Prison in Carson City operated their own casino complete with poker and blackjack card games, sports betting, and even gin rummy.

Between 1932 and 1967 inmates of the maximum security prison run the “Bullpen Casino”, a converted stone building on the state prison’s 140 year old property. During its period of operation, state agency heads and local Kiwanis Club members occasionally stopped by the inmate-run casino to play blackjack card games and otherwise gamble.

At this time, Nevada State Prison was the only prison within the state, even securing those on death row. In 1962, Joe Conforte, most infamous as the former Mustang Ranch owner who now resides in Brazil as a fugitive, was once one of the operators of the casino games.

Chairmen of the Gaming Control Board Dennis Neilander observed. “It was a different time…. They thought it would keep them out of trouble. It wouldn’t happen today.” During that time, prior to 1959, county sheriffs controlled gambling and it was tolerated even before the 1931 legalization.

Inmates who operated the game were required to obtain the warden’s permission and furthermore needed enough money to fund the game. These operators also needed to pay a fee between $25 and $75 every half year. Gardnerville resident Howard Herz asserts “That was a lot of money back then…. Any inmate that had money could play. They invited guests to come in and play.” Proceeds helped to fund the inmate’s well-being.

Las Vegas bus driver Carl Osborne, a former inmate, suggested that prisoners will gamble regardless of the law and there was a belief among wardens that this amusement kept them out of trouble. Croupiers didn’t need licenses “because cheating inmates would be scared of the consequences…. If someone got caught cheating, they might have to be transferred out of state for their own safety. You wouldn’t have been very safe there.”

Warden Carl Hocker put an end to the card counting and other gambling related activities in April 1967 thinking “gambling in prison is degradation, and it’s certainly not constructive…. We’re trying to replace it with constructive, wholesome activities that will contribute to a decent, healthful state of mind.” On Hocker’s pre-emptive orders, the casino was bulldozed before a bill, introduced by several legislators, could pass with the same effect.

Somewhat ironically, Governor Jim Gibbons is now attempting to close the prison itself in order to save money. We may only speculate whether this would be necessary if the Bullpen Casino were still operational.