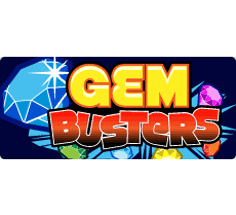 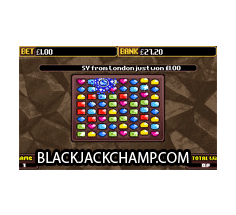 GemBusters mobile arcade game, from Probability, is a mobile casino symbol drop game played on an 8 cells by 8 cells grid. This real money mobile game falls into the category of cascading games very similar to the very popular Tetris. The rules are simple and the rewards are huge in this fun, colorful and very addicting mobile casino arcade game.

As the name implies Gem Busters mobile casino game is all about the sparkle of beautiful gems which are used as symbols, including: diamond, ruby, emerald, amethyst, sapphire, topaz and zirconium. The Zirconium is Wild so it can be used to substitute for any other gem.

Eight different gems randomly fall from the top and settle in the slots of the 8 x 8 grid below. If at least three identical gems touch each other horizontally or vertically, they disappear, the gems above them fall a level lower, and new gems are dropped down to fill in the empty slots.

As the identical sequence of symbols disappear in Gem Busters mobile slot, the gems above cascade down. This may result in the creation of new sequences of identical gems which will disappear as well. This process will continue for as long as vertical or horizontal sequences of three or more identical gems are created and disappear. Your overall win at the end will have an overall multiplier based on how many of those sequences you’ve completed during the game.

You could bet between 50 pence and £5 on each game of Gem Busters with a maximum payout of £1000.

This awesome game is much harder to explain than to simply try for free. It will take you twice as fast to learn it by playing as it did to read this explanation. This real money game is just too original and fun to miss out on!