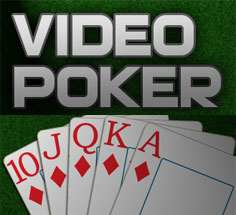 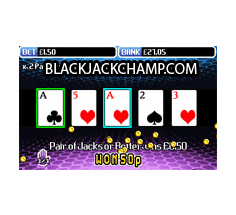 Multi-Handed Mobile Video Poker with ‘Double or Quits’ Feature, from Probability, is a variation of the popular 5 card Jacks or Better video poker which is played in practically every casino, grocery shop or restaurant where permitted by law (or not). This isn’t your typical Jacks or Better, but a multi-hand video poker game with a Double or Quit feature at the end.

To begin multi-handed video poker, first the player selects the total number of hands (1 to 10) and the total amount to bet on each of those hands (between 50 pence and £5 per hand). The game starts which follows the standard Jacks or Better video poker. Five cards are shown and the best cards are kept, the others discarded and new card are re-drawn.

If the cards match the game’s prize table (full house, all cards are Jacks or higher, etc…) the player does not win that prize. Instead, the amount won during the hand gets reserved until the total number of hands chosen in the beginning of the game has been completed. If the player disconnects, they must complete all the hands prior to playing multi-handed mobile video poker again.

When the number of hands selected in the beginning (1-10) are finished, the player is given an option to (1) quit and transfer the winnings into his mobile casino account (2) to play a game of Double or Quit which has different odds and is an entirely separate game, only using the winnings from the recently completed Jacks or Better video poker game.

Double or Quits Rules
Only the winnings from a sequence of 1-10 multi-handed video poker hands can be used to play Double or Quits.
The mobile game of Double or Quits assigns the following values to face cards: Jacks – 11, Queens – 12, Kings – 13, Aces – 14. The remainder of the cards have

The player can only loose the monies won during the initial sequence of games of mobile Video Poker. If the player wins, the amount they’ve won in Video Poker is doubled up and they are offered to replay ‘Double or Quits’ using the new doubled amount.

This is an exciting addition to Video Poker and as the Royal Flush pays 800 times the bet (£4000 maximum on a £5 bet per hand), it is possible to play ‘Double or Quits’ for thousands of dollars!