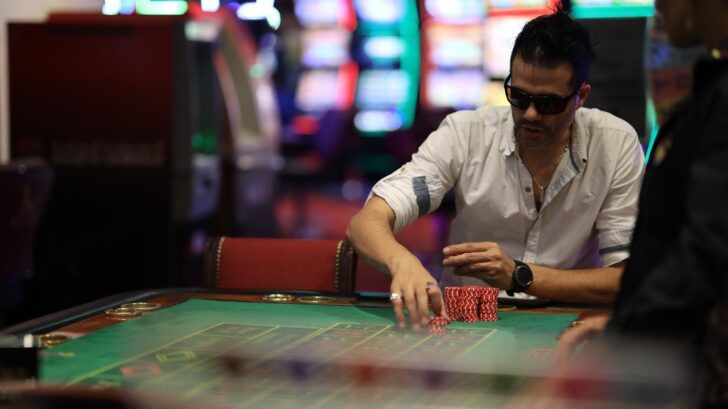 Zeljko Ranogajec is one of the best examples of a person that’s very rich but not so famous. If this is the first time you hear the name, Zeljko is a professional Blackjack player who also takes an interest in Keno and Horse racing. Have a read through our very own biography about Zeljko Ranogajec to really get to know all there is to know about the Australian-born businessman/gambler.

Who is Zeljko Ranogajec?

Zeljko Ranogajec is one of the more famous blackjack players down-under. Born in Australia, the Manx-based professional went on to have a successful blackjack career, along with a stint in both horse racing and keno. However, his life was no golden spoon by any means. He had to work hard to establish himself as a multi-millionaire.

It is quite likely that you’ve never heard of the name before, but Zeljko is actually a pretty wealthy guy. According to 2020s Australia Financial Review (AFR), Ranogajec has a net worth of around AUD$600 million.

Nowadays, the Australian man has ventured into other realms of the industry and is even co-founder of the UK bookie, Colossus Bets. More about Zeljko Ranogajec, he was actually also inducted into the Blackjack Hall of Fame back in 2011.

In case you were wondering, Ranogajec is not a typical Australian surname. Zeljko’s family were Croatian immigrants who moved to Australia before his birth in 1961. During his younger years, he was a student in Commerce and Law at the University of Tasmania. He took a particular interest in studying tax, finance and banking. His hard work was rewarded as Zeljko was in the university on a scholarship.

Majoring in Financial Banking, Zeljko was close to become a lawyer. However, right before the finish line, he decided to transfer to the University of New South Wales in Sydney. Indeed, as he was from a rather poor background, Zeljko had to work in one of the nearby casinos to make a little cash in his free time. He got a job at Wrest Point Casino.

Incidentally, this was the birth of his interest in card games like blackjack and several strategies. He would go on to drop out from the university and focus all of his time on developing his advantage gambling skills.

The first interest which Zeljko Ranogajec took towards blackjack came when he started working at the Wrest Point Casino close to the university. During his work breaks, Zeljko would wander round the casino and soak up the atmosphere and games which were being played. He took an interest specifically to blackjack as he had heard that some special techniques existed to almost guarantee a profit.

During his days as a student, Zeljko would spend hours reading about card counting strategies and afterwards try them out in the casino. He was mathematically sound, thus, counting cards was not all that challenging for him to master. If you’re into it, feel free to learn how to play blackjack for free.

Before long, Zeljko was making more money from playing blackjack than he was through his work contract. This led to a greater appeal in the game and less time for working or studying.

The more success he found, the less interested he was in doing anything besides playing. Eventually, Zeljko pulled out of college altogether to try and make a living through his blackjack skills. He also quit his job at the Wrest Point Casino.

Although Zeljko Ranogajec would no longer be an employee at Wrest Point Casino, he still made many appearances there. He enjoyed the conditions as he knew the place very well and the workers there. Plus, this gave him time to ultimately become a master of card counting and make a fortune in the process.

Sadly, however, all good things eventually come to an end. Perhaps Zeljko spent too much time at Wrest Point as the casino site eventually barred him after winning a massive amount of money. He then went on to play at other casino sites in the area, more notably, Queensland’s Jupiter Casino. Zeljko played his way across most of the Sydney casino strip and got banned in almost each and every one of them. He made a fair bit of cash in the process. To learn more about card counting, check out this referral on how to win at blackjack.

Eventually, he decided to make frequent trips to Las Vegas to try out the winning formula over in Nevada. This proved to be a masterstroke as he was very successful and even went on to form his own blackjack team. The team consisted of three of his college friends and the group made quite a fair bit of money over in the States. Unfortunately, they split up after a horrible driving accident killed one of the members.

Zeljko Ranogajec went back to playing solo and started to also get banned from casinos in Las Vegas as well. He was finding life difficult at the period as he had wads of cash in hand and had to take it all back to Australia. This made travelling uncomfortable as suitcases filled with money raises questions. Finally, he decided to give up playing blackjack for good.

The story of Shelley Wilson

One of the positives Zeljko can look back on is his early days in Wrest Point Casino. At the time, one of the employees was Shelley Wilson, who he took a liking to. However, whilst he was also working there, he never had the courage to express his desires.

After making some money through card counting techniques, Zeljko eventually asked her out and they became a serious relationship. He has since said that travelling back and forth to the US separated the two from each other which was not so easy. But, when he finally came back from the US for good, Zeljko went on to marry Shelley and start a family with her. Ultimately, this was the end of his blackjack career and the start of a new way to support his family.

Taking an interest in Keno

After his blackjack career came to an end, Zeljko Ranogajec was in dire need of finding a new gambling game. He tried many options such as slots and other casino games but his favorite, barring blackjack, was keno.

A funny story actually takes place in 1994 revolving around one of his Keno experiences. Zeljko Ranogajec had won a $7.5 million jackpot whilst playing a Keno game at the North Ryde RSL Club in New South Wales. However, he had spent a week in the casino, averaging around $1 million per day. Thus, even though he made $7.5 million from a lucky jackpot, he had still spent masses during that week. Moreover, he was given a get out of jail card.

Ultimately, this was one of the closing scenes in the professional casino spotlight for Zeljko Ranogajec. His face was recognizable almost anywhere he went, and the casinos were not all that eager to let him come in and win a fortune. Thus, he turned his attention to playing online and also horse racing.

Zeljko Ranogajec became a horse racing enthusiast after putting up the boots for gambling in casinos. He developed a sophisticated betting system which allowed him to find success on the racetrack. The elements of this would revolve around placing bets which have odds that are worthy of the bet. To be fair, you’d need to have a good knowledge of understanding liquidity. Of course, also how to chase it if you want to master the Zeljko technique.

He would spend most of his time in Australia and watch horse races for the Melbourne Cup. When placing bets, he takes into accounts all the factors, including previous races and performances.

On average, it has been said that he bets around $1 billion per year on horse racing. Zeljko is successful and placing these bets but there have certainly been several instances in which he has made poor judgments and picking the wrong horse. This is possibly because instead of banking on himself, as he did in blackjack, he’d be putting his faith in a racer.

Nowadays, it’s a pretty rare sight to see Zeljko Ranogajec. He has gone low-key for the past 20 years or so, since he ultimately stopped showing up for big pay days at casinos. Zeljko is a regular donator to several charities including the Humpty Dumpty Foundation which gives medical equipment to children’s hospitals.

On top of that, Zeljko and Shelley own a beach house on Balmoral Beach in Sydney and a mansion in Mosman. The former blackjack professional has actually gone on to invest in his own online bookie site in the UK, Colossus Bets, and even worked with Newfield Limited.

Finding information about Zeljko Ranogajec is quite a bit of a challenge. Rumor has it, he actually goes by the pseudo name, John Wilson, to avoid recognition in Australia. It is quite unique, that Zeljko has gone on to be massively rich but not all that famous. He is certainly enjoying the best years of his life right now.

Click here to more BlackJack games at the BetVictor Casino