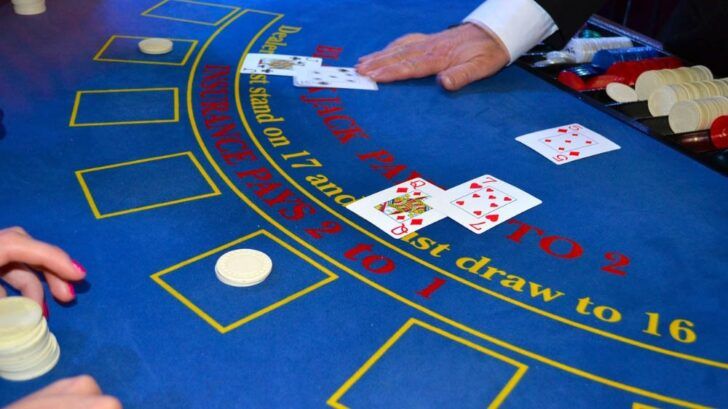 If you enjoy playing Blackjack, then we’re sure that at some point you’ve probably pondered as to where the game came from and how it came to be the most popular table game in the casino? So today, let’s have a look at the long history of the wonderful and immersive game of Blackjack.

The Beginnings And Twenty-One

The general view is that the game of Blackjack has its first origins during the time of ancient Rome. Though never actually confirmed, there, Romans would play a gambling game with wooden blocks. This game was to be the precursor to the game of twenty-one. This went on to be a popular game in France during the 18th century. Though the game’s distant past remains a mystery, we do know about twenty-one in much more detail as we can find many references to the game in both art and literature from this period. For example, the game of twenty-one is mentioned by Miguel de Cervantes in a short story, titled “Rinconete y Cortadillo.”  This was written in 1613 along with his collection of novels known as the “Novelas Ejemplares.”

Of course, Cervantes is best known for his beloved novel, Don Quixote. And this novel includes a passage on how two-card cheats were working the streets of Seville at the time. The story mentioned that these two characters were very adept at cheating. It also goes into the mechanics of the game they were playing, “Veintiuna” (which means 21 in Spanish). The idea of the game was to reach 21, but without going over. And with an Ace having the value of a one or an eleven. Sounds familiar!

To Spain And France

This tells us that the game was popular throughout the Spanish region of Castile from the beginning of the 17th century. During this same period, literature in both France and Spain suggested that the game was regular fare at drinking houses, though going back further, the game’s origins are lost in the midst of time.

The game started to be taken seriously across France, after the French court to a liking to the game of twenty-one, and it became a popular choice in casinos across the country at the beginning of the 18th century. The French only naturally gave the game a French name, “Vingt-et-un” and the game was in fact very similar to the Spanish Veintiuna, though elements of other popular cards games such as “Chemin de fer” (which went on to be Baccarat as we know it today) and the game of “Ferme.” Thanks to its popularity in the court of King Louis XV, the game spread throughout Europe. In the countryside of France, the game was referred to as “Quinze”. In Spain, the game’s name evolved into “Trente-Un” and in Italy, “Sette e Mezzo.”

Blackjack History: To The Americas

Thanks to the French colonist, the game spread to the Americas during the 18th century. The game quickly established itself as being one of the most popular pastimes. It was played in gambling halls up and down the country, with the city of New Orleans legalising gambling with the game in 1820. Its popularity spread across the new country thanks in great part to a woman. Her name was Eleanor Dumont. She was a French national who opened a gambling parlour in Nevada City in 1854.

She had learned how to play Blackjack to a highly skilled degree. It should be noted that she was a rare sight in that women normally had nothing to do with the immoral practice of gambling. But she was a very skilled dealer, and her establishment, “Vint-et-Un” quickly became famous, as the reputation of this “woman dealer” started to spread, as people travelled long distances to see her play.

A New Name For An Old Game

Rather unfortunately by today’s standards, Dumont was known as “Madame Moustache.”  This was thanks to an abundance of dark hair on her upper lip, as well as her carding skills. She was to die in 1879. But her legacy was to see the game grow and spread throughout the country well into the 20th century. No one can pinpoint the actual date that Blackjack finally displaced the game of twenty-one. There’s a general belief that it was around the time of the First World War. Casinos were offering bonuses for players who were able to win the round with the initial hand of an Ace and a “black” jack. This would be either a jack of clubs or jack of spades. This meant that the real object of the game was to get a “black-jack.”

And So The Game Begins

Though Blackjack was played for decades later, it was predominantly seen as a game of chance. The idea that the mathematics of probability could be of use to players was only to come much, much later. Only in 1956 did a group of learned professors (known as the “Four Horsemen of Aberdeen”) publish their treatise on Blackjack called “The Optimum Strategy in Blackjack”. These authors were Roger Baldwin, Wilbert Cantey, Herbert Maisel and James McDermott. This was to become the gambler’s bible for Blackjack, with many players studying and digesting the work, to later use this knowledge of perfect Blackjack strategies to go on and win huge amounts of cash.

A good example was the player, Ed Thorpe. He made use of these findings when publishing his own book on the matter, “Beat the Dealer.”  This was a smash hit in 1963. Then in 1966, it was republished, with updated sections on more detailed Blackjack strategies.

One of the reasons this book on how to win at Blackjack became so popular was that it was the first to both devise and explain the controversial practice of counting cards. By being able to estimate the specific cards left in play, a player could swing probability into his favour as the remaining cards would lead to certain preordained outcomes. There were already some primitive forms of card counting in use throughout the 1950’s. But Thorpe’s book really raised the ante and bought the practice into the mainstream. In fact, with many gamblers were trying and succeeding with his methods.

As a direct result, casinos began to change their rules and game play structure to make counting cards more difficult. This included using more decks, the introduction of shuffling machines, as well as better training of dealers to spot such activity. of course, by playing online things are a lot simpler and the game play is a lot faster. The more hands you can play, the better the odds of winning. That’s why we like to head over to Bet365 Casino to try our hand at live dealer Blackjack. It’s great fun and you have a very good chance of taking home soem cash.

Several other books on Blackjack strategy and mathematics of probability have been produced since. These include “Beyond Counting” by James Grosjean, “The House Advantage ” by Jeffrey Ma and “The Theory of Blackjack” by Peter Griffin.

Blackjack is now the most popular table game at the casino. Bringing us up to date, there are also video console versions of the game as well as online mobile games. These have the additional advantage that you can play them at any time and anywhere on your mobile device. As casinos use incentives to attract new and existing players, the amount of cash to be won in tournament competitions has ballooned. Now you’ll find eye-watering amounts, with $500,000 and $1 million prises being relatively normal. These competitions include The World Series of Blackjack and the Las Vegas Hilton Million-Dollar Tournament. Also the Ultimate Blackjack Tour. One of the best online casinos for Blackjack is Bet365 Casino. They also have a fantastic First Deposit Bonus of 100% up to £100!

Blackjack History: The Hall Of Fame

California opened a Blackjack “Hall of Fame” in the Barona Casino in 2002. Inductees include Griffin, Grosjean, Thorpe, McDermott, Baldwin, Canty and Maisel. Others include some big winners including Don Johnson. He managed to win a staggering $15 million in 2011 from casinos in Atlantic City. Then we have John Chang, who managed the famous MIT and Harvard Blackjack teams. They all did so well making use of card counting and other techniques to beat casinos around the world.

Finally, we should mention the media. Particularly in the form of cinema, which has helped bring the game of blackjack into the public eye. Films like “21”, “The Gambler” and “The Hangover” all have had a part to play in the story of blackjack and its continued popularity.