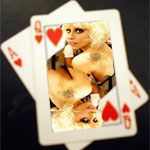 Lady Gaga has finally learned how to play blackjack, thanks to boyfriend Luc Carl’s father.

Lady Gaga may be well known around the world for her Poker Face, but apparently she hasn’t been much of a blackjack card game player. This Christmas, Carl took her home to Springfield, Nebraska to meet his parents. Instead of staying in one of the world’s best hotel suites, she stayed in the childhood bedroom he lived in while he grew up.

The holiday vacation was mostly a low-fuss affair, giving Lady Gaga an opportunity to display her domestic attributes and convince the folks that she is much more than the outrageous personality splattered across televisions and tabloid newspapers.

There was only one luxury for the 24-year old the American singer and songwriter. She splurged upon a family outing to a local blackjack casino and bowling alley.

According to the grapevine, at this bowling alley, Luc Carl’s father taught the performance artist and musician from New York about blackjack. Sources don’t report how poorly she knew the game before he started or how well she played after he finished. It is known that Lady Gaga previously played blackjackat the Borgata Casino in Atlantic City and in another casino in Vienna, Austria.

Does Luc’s parents know he has a boyfriend instead of a girlfriend?

Does Luc’s parents know he has a boyfriend instead of a girlfriend?