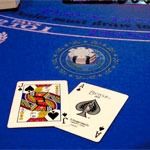 Blackjack and other “games of chance” for charitable purposes have been legally organized in New Hampshire since 1977, but the gaming changed when the 2006 state Legislature voted to permit for-profit companies to operate these Blackjack casino games.

While many maintain this growth is the natural evolution of an ancient practice, chairman of Granite State Coalition Against Expanded Gambling Jim Rubens is concerned “once you let a little in, the loopholes tend to get larger”.

Despite such sticks-in-the-mud, selectmen (i.e., city counselors) are supporting a scheme which will create a perpetual charitable gaming establishment at Hampton Beach. This establishment will include blackjack card games and other casino games, such as poker.

Throughout the region, from Hampton Falls to Seabrook Greyhound Park and beyond, plans are being crafted to create similar enterprises where blackjack enthusiasts, poker players, and other gamblers can have their amusements while contributing to worthy causes.

Before 2006, charitable gaming was run by regional police commissioners. When legislation was passed transferring oversight to the state’s Pari-Mutual Commission, lawmakers were trying to consolidate the oversight of gambling under a single crown.

According to director of state Racing and Charitable Gaming Commission Paul Kelly, when the police were in charge of the events, they failed to enforce $2 wager limits. Optimistic regarding this clear oversight failure, which could actually have stemmed from conflicting interests, Kelly suggested “I don’t think they realized how much money was moving in those organizations.”

According to the Charitable Gaming Commission, in 2009 $36.5 million were wagered while playing blackjack for a good cause. From this, organizers were able to retain $7.2 million, while $4.5 million went to participating charities and $1.5 million was consumed by taxes. Winners took home $23.3 million.

Enjoy it while it lasts!

Enjoy it while it lasts!